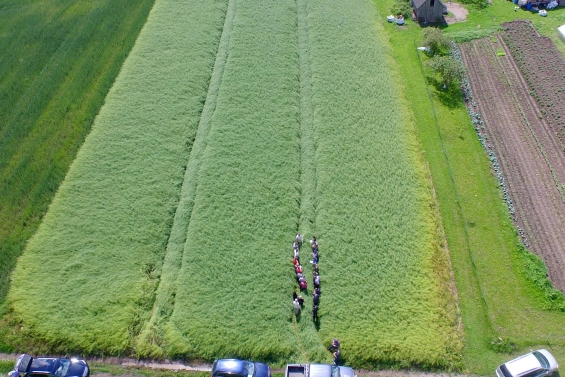 Transformation of organic remains to humic materials is called humification process. Differently from live cells, where the biopolymer synthesis takes place depending on the genetic code, humification process does not have a genetic code, therefore can appear various composites both very simple ones and more complicated than the initial biomolecule. Newly created composites repeatedly participate in various syntheses and these processes are continuing.

Why are we recommending to use Plant and Soil probiotics? Recently, it has been pointed out that soils have lost significant amounts of organic carbon, where humic acids found in our recommended products consist of nearly 4 times the amount of organic carbon found in plants’ and animals’ organic composites. Humic composites in Soil Probiotic are not just the remains of simplest life processes, they are natural and important products of the mineral composites created during the World evolution.

Plant and Soil probiotics directly influence plants as they are nutrients’ source. By using specific production technologies most important plant nutrients are saved, which are used by plants when microorganisms transfer them to mineral form. Namely, mineral form elements reach plant biomass.

Sometimes it is hard to outline direct influence of humic substances to plants as they can be indirect i.e. changes in soil physical – mechanical, chemical and biological properties. Soil Probiotic has complex influence on plants and soil. Scientific observations showed that Probiotic features protective functions by binding heavy metals, radionuclides, organic toxins and prevents them from reaching the plants. By working through the soil Probiotics has influence on more effective plant growth and development.

By summarizing test results and international innovations in can be stated that used products increase nitrogen, phosphorus, potassium and carbon metabolism. Improve nutrients‘ penetration to the roots and solve their effective absorption problems. By using Plant Probiotic and Soil Probiotic the effectiveness of nitrogen, phosphorus and potassium increase couple times, which lets to reduce fertilizer norms up to 30%.